So where did I leave off last? 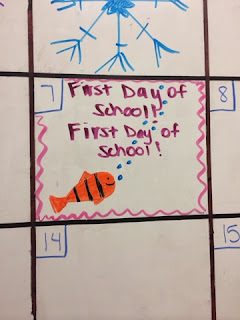 But after I walked into my first class with a syllabus that was half-an-inch thick, I was feeling more...
We've hit the ground running.

My buddy (from the class above ours) presented me with a nursing school survival kit. 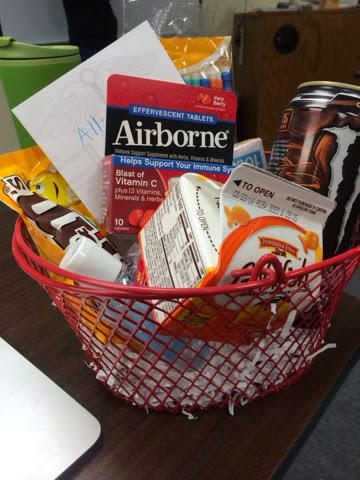 It included such essentials as:
-Airborne (bump up that Vitamin C)
-Goldfish crackers (because they are the snack that smiles back)
-Sour Patch Watermelons and Peanut M&Ms (because they're awesome)
-Monster (caffeine, for sure)
-Pencils (pens are verboten in skills lab)
-Notecards (for learnings, of course)
-and Purell. Because hand washing is the best way to prevent the spread of infection! (x infinity)

She also wrote a really sweet note. Definitely brought a smile to my face.

So, it has begun. We (as a family) have signed up for two and a half years of insanity, but it will be so, so worth it in the end.

She's been flirting with the walking idea for two months now, at least, but would take a step and then chicken out and drop to her knees (always with a huge smile as we would try and encourage her to take a few more steps). But yesterday, when I set her down on her feet, she stayed stable for a few minutes and then stepped cautiously toward me while I encouraged her. When she fell into my arms, she had the HUGEST smile as we all clapped for her. So stinking cute.

I can NOT believe she is turning a year next Thursday! The year has just flown on by, and I'm scrambling to plan a small family party for her. As long as there is cake, we're good, right?
at 3:47 PM

Welcome to my place in cyberspace!